Out with the old…

This past week was a rough week for SS and I. When things go wrong, our relationship is really tested. Thankfully, we have enough love and respect for each other, to know where our limits are, and what buttons we can and cannot push.

Last Sunday, our washing machine broke. Right in the middle of a full load, it stopped and wouldn’t continue. When SS called about it, they said nobody could come until Tuesday. This made me super irritated, but there really was nothing I could do about it.

Tuesday came. SS took the morning off so that he could be home when they showed up. I think he secretely loved being able to sleep in and play video games while he waited. They came, fixed the machine, and back to work he went.

I came home from work and immediately started a load of laundry. Much to my dislike, the machine stopped working right after filling up with water. Grrr! Were they serious? Was this machine STILL broke? Now I was so mad, I was screaming at the machine. I knew that if I called them back to tell them the machine wasn’t fixed, I’d end up more aggrivated because I was going to have no problem telling them that their technician was an idiot and they were stupid for hiring him. So, SS called them. They promised to come back out the next day.

(Quick backstory - something on this machine breaks every few months. They have to come out and fix it a few times a year, so my frustration is from constant, reoccuring problems.)

Wednesday came. SS took the morning off AGAIN, lucky dude. They came and fixed it. It’s been working fine since, although it doesn’t spin the load before it’s done. I have to wring the clothes out before putting them in the dryer. I pick my battles with these people, so wringing out my own clothes is fine. At least the washer is working.

Keep in mind, all while this is happening, there’s that strange poop smell permeating the house that is also making me crazy.

Thursday when I came home from work, there was a large puddle in the middle of my kitchen floor. I didn’t think anything of it, at first, and just cleaned up the water. About 30 minutes later, I opened the freezer to see what I wanted to pull out for dinner, and EVERYTHING WAS THAWED!! I stuck my hand inside, and there was no cold air blowing. I opened the fridge and the light came on with no problem, but there was no cold air inside. I left it all closed, thinking that whatever coldness was left inside, would stay trapped until SS came home and could assess the situation. He immidiately knew the fridge had finally broke. It was about 30 years old, so actually surpised it lasted that long.

We grabbed everything from the freezer and took it over to SS’s folks house. At least we won’t lose all that stuff, then went to dinner to discuss what our next plan would be.

Option 1: Find a used fridge, rent a truck and dolly to haul it, find someone to help carry it upstairs into the house, THEN have to bring the old one down and dispose of it somewhere.

Option 2: Buy a new fridge, have them deliver it, carry it upstairs, and haul the old one away.

We talked it over, then slept on it. 24 hours later, we both knew the best option really was option 2. So, fridge shopping we went…. 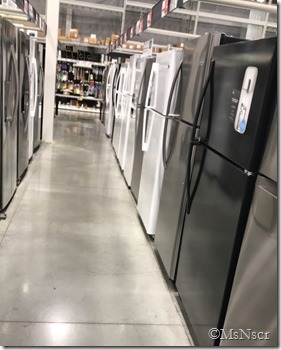 They deliver it on Sunday.

Email ThisBlogThis!Share to TwitterShare to FacebookShare to Pinterest
Labels: shopping