The new cast of Dancing with the Stars

Guess what time it is, readers? It’s time for Dancing with the Stars again. I’m excited to get another season underway. There has been lots of commentary about the cast of this upcoming season. As always, competition brings out the good, the bad, and the ugly in people, and this season is no exception. Let’s meet this seasons competitors:

CHAZ BONO (Lacey Schwimmer)– I’ll go ahead and start off with the most talked about contestant. Who is Chaz Bono? Well, Chaz started out as cute little Chastity, but in 2008, she took on all the legal avenues in order to ensure she was now in fact, a man. Chastity Bono is now Chaz Bono. Daughter turned son of Sunny and Cher.

ELISABETTA CANALIS (Val Chmerkovskiy) – Honestly, I didn’t know who this was. I had to Google her name. And when I first saw her picture, I said, Whoa! She looks like Sandra Bullock. But, she’s not. She’s Elisabetta Canalis, and she’s an actress. Her most famous claim to fame is probably her recent relationship with George Clooney. I haven’t seen one single thing she’s been in, but I wish her luck on this show.

HOPE SOLO (Maksim Chmerkovskiy) – An American soccer player. I’m not in any way a soccer fan, but I do have some friends that are pretty die hard about it and will watch this just to see her dance. I guess that’s the point, right? 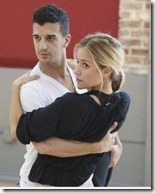 KRISTIN CAVALLARI (Mark Ballas) – Another freakin’ reality star. Oh, brother. Whatever. And I’m not one bit surprised that she’s paired with Mark Ballas.

RICKI LAKE (Derek Hough) – A former talk show host I thought was gone from television. Nope. She’s not. Her annoying voice is right back in our faces.

RON ARTEST (Peta Murgatroyd) – A Laker. Wait. Let me rephrase that. My least favorite Laker. Ugh. No doubt though he will bring comedy to this show.

CARSON KRESSLEY (Anna Trebunskaya) – A fashion expert. Oh, I can’t wait to see how this season goes for him. That’s all I have to say about that. 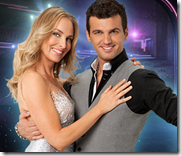 CHYNNA PHILLIPS (Tony Dovolani) – Whoa! I’m surprised she’s still in the media limelight. Remember the singing group Wilson Phillips? She’s the daughter of John and Michelle Phillips (from The Mama’s and the Papa’s). I used to LOVE her. She was my favorite of the trio group. I used to sing into the mirror and act like I was her. Shh.

DAVID ARQUETTE (Kym Johnson) – All the years I’ve been watching television, I’ve seen several of the Arquette family members flash across my screen. Clothed and unclothed. I never followed them closely, and I never considered myself an “Arquette” fan. However, I’m not totally against cheering for him. If he does well, he might be who I cheer for.

J.R. MARTINEZ (Karina Smirnoff) - Just an ordinary guy turned Army war hero. Severe burns to 40% of his body in Iraq made him a humble mad. A now motivational speaker and actor, I can only imagine his words would bring me to tears. 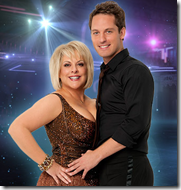 ROB KARDASHIAN (Cheryl Burke) – Um, who? A model and music group manager. Oh, and he belongs to the famous Kardashian bunch. You know, Kourtney, Kim, Khloe. I’m not going to pretend that I know who this guy is, cause I don’t. And I’m not going to pretend that I like him, cause I don’t. But, he has an entire season to change my perception of him. If he does it, fine. If not, fine too.

So there you have it. The next 12 people to face the judges of Dancing with the Stars. I can’t wait. I’m excited.

I’m going to speculate it’ll be a good battle between Elisabetta, Hope, Kristin, and JR.  :-)