I Ain’t Afraid of No Ghost 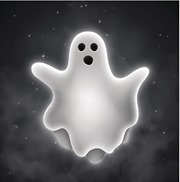 Do you believe in ghosts?
I don’t. Never have, and likely won’t ever. But here’s the thing. Something strange happened in my house the other day, that carried into two additional days, and it has me a little freaked out.

Tuesday evening, I was going through the drawer in the kitchen that holds all the utensils that aren’t spoons/forks/knives. You know, the drawer that holds the potato peeler, the baster, the meat thermometer, etc. Anway, as I was searching through the drawer, I saw a few things that I never use. I only have them because they used to be my stepdads and I just figured some day I’ll use them. I closed the drawer and something strange was happening when I glanced over at the wooden spoon holder on the counter. It was spinning. SPINNING AROUND. Nobody else was in the kitchen, and the drawer that I closed doesn’t touch that. I can’t explain why it was spinning. SS on the other hand, is convinced that a ghost did it.

Immediately I blew off the idea, because I don’t believe in ghosts, but SS kept getting the chills, which apparently lets him know that one is near. I couldn’t explain what would have made this damn thing spin, and it bothered me for hours. It bothered me so much, that I was getting irritated by the thought of it. I just couldn’t shake this strange feeling.

Wednesday when I got home from work, my entire house smelled like poop. Impossible, I thought, since nobody had been home all day, and our cat is pretty comfortable with using the litter box. I walked around everywhere, putting my nose in places that I didn’t ever think I would, and STILL couldn’t find where the smell was coming from. It was as if it was far off in the distance, yet right there!

I became very obsessed with finding this smell. SS couldn’t be of any help because he doesn’t have a sense of smell, so I was flying solo on this mission. At one point, SS told me that it was just in my head. I eventually had to give up my search and just light candles hoping it would make whatever the smell was, dissipate.

Thursday morning, I woke up to that same damn smell. It was absolutely horrible. I walked all around my house, smelling every inch of everything, once again losing my mind. SS finally says to me, “It was that ghost from the other night. It left that scent behind because you didn’t believe.”

When he said those words to me, I knew IMMEDIATELY that it was my stepdad who made that utensil holder spin. It was him that made my house smell like poop. I just KNEW it! But I had no idea how to prove it, because afterall, I don’t believe in ghosts.

When I came home from work that evening, I had a conversation with that ghost. A deep conversation that probably should have happened long ago. I also made it clear that it was not acceptable to make my house smell like that for any reason whatsoever. I’m crossing my fingers, hoping, the smell is forever gone. I can’t take another round of that.