I know, I know. They have a day for everything. I don’t usually buy into this stuff, except maybe Pizza day because SS loves it, but today, I thought it would be nice to celebrate my kitty. He will be getting a special treat for dinner tonight.

SS and I have a pretty steady routine about how we do things. It’s the same every day. Because of this, Ebony has apparently adapted his internal clock to this routine, and when we don’t do something at a specific time, he lets us know. Here’s what I mean…

Every night at 10pm, SS cleans the litter box and takes it out to the trash. He takes Ebony with him when he goes, so that Ebony can chase crickets in the hallway. This is Ebony’s outside/hunting time. If there’s a night when we are busy and not quite ready to do the litter at 10pm, the cat will stand by the front door and meow, loudly, until one of us get annoyed.

SS gets home from work between 6:30p and 6:45p. At this time, the cat is typically given his dinner. If SS has been home for ten mintues, and hasn’t fed the cat, he will absolutely let you know. He will stand in the middle of the living room, right in front of you, and meow. Loudly.

On and Saturday or Sunday morning, Ebony is literally in our face at the normal time SS’s alarm goes off. My alarm is set for a different time every day, so I guess SS’s is easier for him to understand. Either way, this cat IS our alarm clock.

One of Ebony’s favorite things to do, is sit out on the ledge of the balcony, and look around at all the other animals and people that walk by. There’s a little girl that lives a few doors down, that loves to talk to him.
Sunday morning, SS and I are watching TV, when Ebony suddenly runs into the house with something in his mouth. I couldn’t tell what it was because the coffee table was blocking my view, but SS could see and jumped up yelling, “He’s got a BIRD in his mouth!” He was strutting around so proud of himself, until SS yelled. He instantly dropped the bird and cowered down as if he was scared. SS never yells like that, so he just didn’t know how to react.

SS grabbed the bird with a paper towel and took it outside. It was lifeless, just staring at him, with one leg dangling. There was no blood, but this bird was clearly not well. It wasn’t even moving.

Several mintues later, I went outside to see where SS went, and he was standing by the dumpster with a look of fear on his face. He knew he needed to put this bird out of its misery, but just couldn’t actually do the task. Let’s be real. SS is a sensitive soul.
I stood there, tears streaming down my face like a faucet, and told him to just put it down and let it die naturally. Maybe a bigger bird would come get it, and the food chain cycle would continue. I walked back into the house.

A few minutes later, he came back into the house with a smile. He said the bird flew away when he put it down. I couldn’t stop crying, so had a really hard time believing that it could have happened that way, but he swears up and down that the bird flew away. So, I have to believe him. And trust him.

I’m not mad at Ebony. He did nothing wrong. For him to be able to get that bird, the bird would have had to come down into the balcony. At that point, he thinks it’s just another cricket prey in his eyeline. 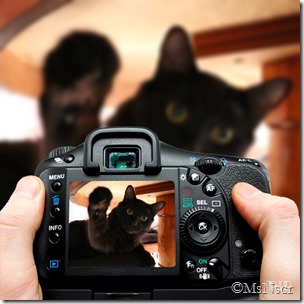 SS and I have talked about getting another cat. SS isn’t completely sold on the idea, which is why we are still in talks, but I would like Ebony to have a friend. A coworker fosters animals, and right now, she has a cute little grey & white kitten on which I’ve got my eye. The litter was rescued from horrible conditions, and she was one of the lucky ones to make it out safely. I’d like to give that little girl a loving home. And since a dog isn’t really the best option for someone that isn’t home all day, and doesn’t have a yard, I can’t give in to SS’s want of one. It’s just not realistic.