A Trip to the Vet

A few weeks ago, I noticed that Ebony was sneezing. I decided to go ahead and make an appointment with the vet, in order to avoid it turning into something more. Plus, we knew nothing about the shot history or even age. It was just the right thing to do.

After the vet did her exam, we were shocked to hear that Ebony was actually a neutered male. Whaaaaaaat?? We had spent months calling him ‘she’ and ‘her’, and now we had to completely flip that and start saying ‘him’ and ‘he’.

We also found out that she was microchipped, and the chip was registered to a woman. We contacted the microchip registry and they told us they will attempt to contact the registered owner for four days, and if they get no response, Ebony would be legally ours. SS and I were very sad to know that there was a strong chance someone would respond and want him back. It actually made us cry.

We waited the required four days and never heard a peep. Nobody called, emailed, or texted. She was legally ours. Now, we need to figure out how to change the chip registry to us, which is proving harder than originally thought. Grr! 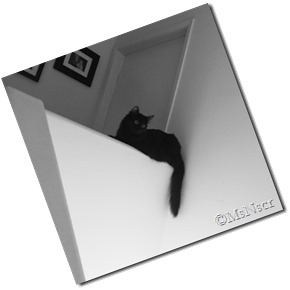