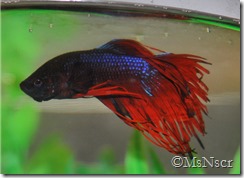 A little over three weeks ago, we lost our very awesome Betta Fish, Indy. He was an amazing fish. He would follow our finger around the glass, as if he was targeting his mark like a trained dog. He would jump up out of the water to catch pieces of food, as if he was a hungry Great White Shark. Simply put, he was the best fish I’ve ever had.

We started to notice he was laying on the bottom of the tank, which wasn’t his MO. It was the exact opposite of his normal. He would wave his little fins at us when we’d walk up to the tank as if he was trying to tell us he was still alive, just barely. After about 24hrs of this, we started to notice that he wasn’t even coming up to the top of the tank for air. We would watch him try to swim to the top, but ultimately fall back down without even getting all the way up. It was painful to watch.

We noticed his scales were not laying flat on his body anymore, and that he had taken on the shape of a strange looking pinecone. By this time, it had been about three days since he’d eaten. We lowered the water level in the tank so that he didn’t need to swim up so high, but it continued to be a struggle until he just couldn’t come up anymore.

Constipation, kidney failure, or Dropsy, we’re not sure.

We read about several different things to do to help save him, but after about four days of trying, he finally succumbed to whatever was killing him. I found him at the bottom of the tank when I came home for lunch, and his little fins weren’t moving to greet me. Although I knew it was only a matter of days, it broke my heart and I immediately fell to the ground in tears. I could barely see the numbers on the phone through the tears, but when SS answered the phone, he knew why I was calling. I couldn’t form words, it was just sounds coming out. I could hear him crying on the other end, and that made it so much worse for me.

It took us a couple of weeks to be able to talk about him without crying, and when that happened, we went ahead and got another one. He’s a completely different color, so hoping he brings a different kind of vibe to our home. 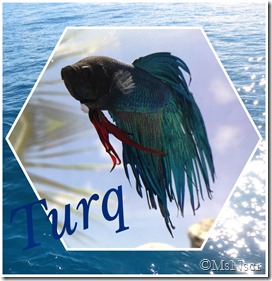