I’m can breathe out of BOTH nostrils again!

When I was about nine or ten years old, my nose started to change its shape. It started to grow in two different directions, causing some breathing troubles, and a lot of self consciousness. The septum started to move and cover up one of my nostrils. I always attributed it to being hit in the face by a tetherball in elementary school, but who really knows?

Well, enough was enough. I finally mustered up the courage to see the doctor. After one visit, I was sold. Although scared, I went ahead and scheduled the appt. 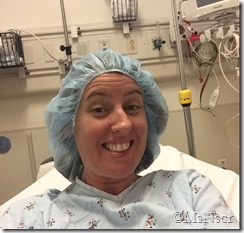 Surgery Day: Wednesday.
I was beyond scared. SS took the day off work so he could accompany me (thank God for that), but that didn’t seem to ease the anxiety. Anxiety has ruled my life for many years, and today was no exception. All the way up until the moment they wheeled me into the O.R. room, I was scared. All the nurses knew it, and they did what they could to help make my experience less scary. The last thing I remember was seeing the doctor walk into the O.R. room. The double doors opened like he was a saint walking into the room. *Eyes closed*

Waking up in the recovery room.
I remember nothing. One of my biggest fears was that I would wake up during the proceedure. That didn’t happen. When I mentioned that fear to the Anesthesiologist, he laughed at me. Out loud. As if that was a ridiculous thing in which to be scared. Apparently I’ve watched too many television shows.

Recovery.
Those first few minutes were incredible. The amount of blood that was pouring out of my nose, was like something from a horror movie. It just kept coming. The nurse must have changed my nose dressing (they call it a mustache) about ten times in that hour I was there. 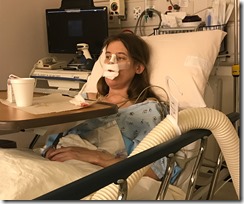 Time to go home.
This was my favorite part of the whole day. Knowing that the worst was over, I felt some sort of relief when I thought about being in my own home.

Home.
Ha. Ha. Ha. at me for thinking I could even do half the stuff I thought I could. The simplest things like bending down to pick up the napkin I dropped, seemed almost impossible. I expected the throbbing in my face to be worse, but I think the pain meds they gave helped take care of that. Thankfully.

Sleeping at night.
Trying to sleep that first night was impossible. Having to sit up while sleeping was so much harder than I thought. I don’t sleep in the car on long drives, and sleeping on an airplane is difficult for me as well. I just knew this wasn’t going to be easy. I did the best I could propped up on pillows in my bed, but after about six hours of trying to fight a numb butt, I decided it was best to get up and just sit on the couch. At least I would be in a sitting up position this way. I turned the television on and within ten minutes, I was out. Finally, a few minutes of sleep.

Day One.
More painful than surgery day. Still taking pain meds. Don’t really have an appetite to eat anything, so it’s just single pieces of bread for now. Lots of dozing trying to make up for last night.

Day Two. Packing removal.
Went back to the doc today to have the packing taken out. Wasn’t really sure what to expect from that, other than some uncomfortable pain. Doc grabbed one piece, then the next, and it was all done in about 3.6 seconds. If I had done that myself, it would have taken me an hour. The sharp pinch it made was nothing compared to what I expected. Immediately I was able to breathe out of both nostrils. This is something I haven’t been able to do since I was a kid. I know there will be a lot of congestion over the next few weeks, but so far, it’s not horrible.

This is where I’m at in the process. Today is still day three. The bleeding has stopped, but there is some oozing that feels a little weird. When I try to clean the blood that is caked in the stitches, my nose starts to throb. Between that, the saline solution, and the ointment, I’ve got all kinds of stuff happening to a part of the body that doesn’t usually even get touched. I hate it.

I don’t know how the rest of the process will go, but I’ll let you know. Stay tuned…

Email ThisBlogThis!Share to TwitterShare to FacebookShare to Pinterest
Labels: surgery