Well, our Summer fun with Lil’ SS has come to an end. Her mom was in town this past weekend to pick her up, and while it was a little sad to see her go, we know she’d rather be with her friends, than hanging out with me. Let’s be honest.

(This photo was from our trip to the beach last week.)

Her and the three other people she came out with, wanted to spend Saturday at the beach. But when we woke up Saturday morning and realized it was going to be raining for the majority of the day, we decided our previous plans for Santa Monica beach were probably not a great idea. SS checked the weather at one of our favorite beaches more north, and when we saw clear skies until 4pm, we hopped in the car and headed that way.

A short hour and a half later, we were all playing out in the surf. All eight of us. And it was amazing. There were rainclouds all around us, in every direction. But directly above us, was clear blue skies.

Just before 4pm, the clouds covered the sun and down came the rain. That was our cue. Enough time in the sun. 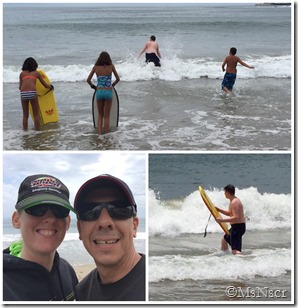 Let’s be honest, it always makes me a little nervous to spend time with Lil’ SS’s mom. I think it’s just a territory thing. Lil’ SS is hers, not mine, so my motherly feelings tend to hide away when she’s around. However, we had a wonderful visit with them and I would invite them back any time. [I can’t go into my feelings and emotions on the whole situation right now, because that’s not what this post is about, but I assure you, there will be a time for that at a later date.]

Hope everyone enjoyed their weekend just as much as we did. I’m headed to go play with my now 15-year-old.

Where does the time go?