When your driver isn’t racing

When I started watching NASCAR, I didn’t have a favorite driver. I watched because everyone else in my family watched. You can read that story HERE.

Fast forward fourteen years.
I’ve sat and watched two full races of this 2015 season (Daytona and Atlanta), and let me tell you, when your favorite driver isn’t out on the track, watching the race is very different. I cheer for Matt Kenseth, Denny Hamlin, and now Carl Edwards because I ultimately like them as drivers – and teammates of Kyle Busch, but it’s just not the same. I’d like to think that Kyle could have given Joey a run for his money in the Daytona race. And I’d like to think Jimmie would have had more competition if Kyle had been racing at Atlanta. But, you just never know. Maybe that’s just wishful thinking from a fan that misses her driver.

Kyle moved last week from the first hospital in Daytona Beach, to his local hospital in North Carolina. He looks in good spirits after sustaining a right lower leg compound fracture and left mid-foot fracture. 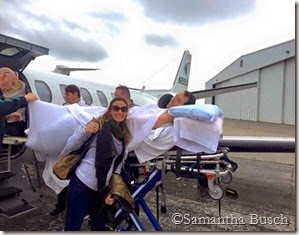 And then just the other day, he was allowed to go home……. 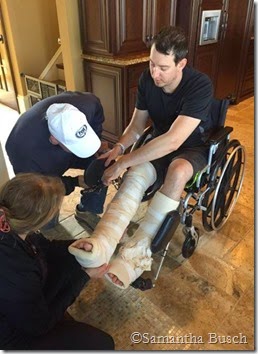 It will be a long road to recovery. It’s likely we won’t see you back on the track until mid season, and because of that, I feel less bad about not being able to attend the Fontana race in a few weeks.

Now hurry up and get better so us KB fans can cheer you on!!