As a school photographer, it’s my job to make every student smile. Sometimes that involves making funny faces. Sometimes I have to play a certain song that the student likes to sing so that he’s happy enough to smile. Sometimes I convince a shy little girl that I’m going to send her pretty, smiling picture, to her favorite character. (Kids think it’s amazing that I have Elsa’s email and then tend to want to smile for that.) And sometimes, for the boys, it involves talking about food or video games. One of the very things I don’t want to discuss.

When The X and I were married, about 85% of the aggrivation that came out of my body towards him, was due to video games. He buried himself in them, for days at a time. He wouldn’t sleep. He would eat on his own terms, without the rest of us. I was being ignored, on purpose, and it pissed me off. Now, here I am, in another relationship with someone who loves video games. (Insert eye roll here.) 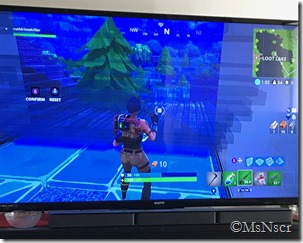 One of the big video games that kids are playing now, is Fortnite. It’s a game that drops 100 people onto a giant map. The players battle each other, building forts to hide behind. The goal is to be the last one standing. Well, SS has developed some sort of addiction to this game. He has gone from playing XBox once or twice a month, to EVERY. SINGLE. DAY. Because of this game.

I’ll be honest, this doesn’t have me smiling from ear to ear. However, it does allow me to come up with additional conversation starters for those hard to photograph 6th - 8th graders that don’t like to smile. Silver linings.