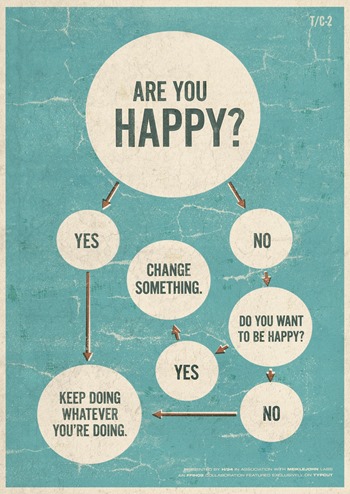 It’s no secret, for years I was miserable and unhappy, and I brought EVERYONE around me, down into my miserable hole.
I was recently divorced, and I wasn’t allowed to see my five year old son. I was living with my father, who, in all terms of the word, is a monster, and I was borrowing his car to make the 1.5hr drive to work every day because The X got the car in the divorce. Life really sucked.

Dad got tired of me always being gone with his car, so he bought me my own. It wasn’t a brand new, fancy car, but it was new to me. It got me to and from work, and allowed me to stay out of the house and away from him as much as possible. As much as I still hated him, I was grateful to have my own car. I was happier.

I still hated the 1.5hr drive to work, each way, so I changed jobs. Now my drive was only one hour. I was happier.

One night, I came home from work and my dad wanted to fight (he did this ALL.THE.TIME). I was tired and exhausted from working all day, but he didn’t care. He made all kinds of threats against my life and my friends’ lives, so I grabbed a few things and left. I ended up staying with my then boyfriend. A few days later, he went back to the house with me because I didn’t know what kind of mood dad was going to be in. Unfortunately, he wasn’t in any better of a mood. This was the day he pushed me down on the floor into the dishwasher. As I was walking back to my room to collect some more things, my head just about went into the wall when he attacked me. My boyfriend grabbed my arm and pulled me out of there immediately. I went back only once after that, and it was with three other guys to help me move. I cleared out all my stuff while my dad was asleep. Freedom from the madness at last. I was happier.

Several years later, I was in a funk. I was unhappy at work, and unhappy about where I was living. I was feeling like I needed a big change. I needed to be happy. A few weeks later, I met SS. We hit it off great, and I was happier. I changed jobs again, this time because I was ultimately so unhappy there, but ended up getting the same job with another company. It wasn’t what I wanted and was very unhappy. I would cry on my way to work every day, and I would cry in my office. I was so miserable and because I couldn’t get it off my mind, I was making it worse. It was literally making me sick. I couldn’t eat. I couldn’t sleep. I was depressed and miserable and hated everything and everyone around me. All because I hated my job.

One Sunday night before going to bed, I prayed really hard. I mean HARD! Anyone that knows me, knows I don’t pray. I’m not religious and don’t believe there is a higher power. Things don’t happen in life because you prayed for them to happen. I’ve prayed a million times that I would win the lottery, but alas, here I sit, without millions in my bank account. But despite my doubt in prayer, I still did it. When I woke up in the morning, I made a decision that I didn’t want to cry that day. I didn’t want to drive to my office and be unhappy. I was taking a stand and turning things around. Because I wanted to. Because I wanted to be happier.

Things between SS and I became a little tough. I was now out of a job, and he was supporting us all by himself. My school had shut down, so I didn’t even have that to keep my mind off the stress we were feeling at home. I wasn’t depressed or unhappy or sleep deprived, and I was happier.

Today, I have one of the funnest jobs in the world. I get to take pictures of kids Preschool aged through 12th grade. I take yearbook pictures, fun Spring pictures, and graduation photos. I am happy.

Today, I have an amazing boyfriend, who supports my job choice, allows me to work at the Daddy/Daughter dances on Friday or Saturday nights, and puts up with all my crazy shenanigans. I am happy.

Today, I have my own apartment that both SS and I work very hard to keep. We decorate it with things that make us happy. We take care of it so that when people come over, it doesn’t look like dirty, gross, slobby people live in it. We are proud of what we’ve accomplished and proud of what we have. I am happy.

It’s taken a lot of years, and a lot of bad times, but I can honestly say, right now, I’m the happiest I’ve ever been. Things are amazing. And do you know why? Because I sought out the things that make me happy. I made my happiness a top priority. And once I did that, all the other things just fell into place.

I still have people in my life today that try to drag me down into their unhappiness. They are miserable, and try to bring all the people around them down into their miserable hole. Some of them don’t even know they’re doing it. It’s just become so normal for them, they are oblivious. Unfortunately, those people take a back seat to everyone else. They get ignored. And they don’t get invited to weddings. *wink, wink* 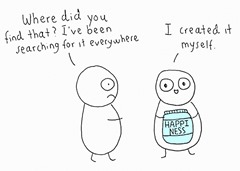 Email ThisBlogThis!Share to TwitterShare to FacebookShare to Pinterest
Labels: happy