Flashback to the 90’s

When I was in middle school, I was very much into music that wasn’t Country. Can you believe it? There once was a time I didn’t listen to Country? I was into Rap, Hip Hop, and even boy bands. Crazy, I know. My very first concert was Billy Joel, which I attended with my parents and some of their friends. The next concert after that, was Michael Bolton. Then Bruce Springsteen. Again, all with my parents. They weren’t the type to allow me to attend a concert on my own, or even with friends without adult supervision, so bands like Bel Biv Devoe and Naughty By Nature weren’t concerts I was ever going to attend. And I just had to accept that.

As the years went by, I attended dozens of concerts, all in the Country music genre, secretly wishing I could go back in time and see those other bands I enjoyed as a preteen, but as an adult.

Then….a Facebook post came across my feed about a concert that was taking place at The Hollywood Bowl in June. It was three artists I absolutely loved when I was growing up, but knew for sure I’d never see. Although Sis lives in another state, I still sent her the post with four simple words “Wish you were here…”. Within one week, she had a flight booked and tickets ordered. We were actually going to be seeing Boyz II Men, Paula Abdul, and New Kids on the Block. It was a dream come true for a preteen. 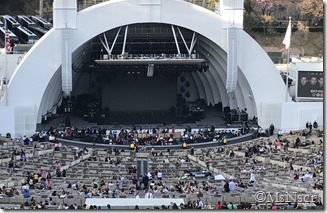 I have some video from each of the performers, but because of YouTube’s policy about uploading videos from concerts, I’ll hold off on that for now. But know that we had an amazing time.

Boyz II Men shocked the hell out of us by playing a few Lenny Kravitz songs. Didn’t even know those guys knew how to play instraments. Just assumed they only sang and danced.

We were a little skeptical about which Paula we would get. 90’s hip hop Paula, or 2017’s pill popping/alcoholic Paula. To our surprise, we got 90’s Paula. She was so right-on!

The New Kids on the Block were phenomenal. They sang songs that everyone was familiar with from the late 80’s, and 90’s, along with songs from their new album, which were pretty good. They sound just the same, but they look waaaaay older. I did think it was a little strange of Jordan Knight to be rubbing himself and humping the ground right after they sung Happy Birthday to a 13-year-old girl that was in the front row, but whatever. Apparently her mom knows what’s best for her.

There were way more men at the concert than I expected there to be. I assumed they were there to see Boyz II Men, but they were singing along to all the Paula and NKOTB songs as well. There were a LOT of groups of women. Some of them it seemed as if they were seeing each other for the first time since high school. Some were unneccessarily drunk and ridiculous, but most people were nice and courteous and just there to genuinly have a great time.

Sis and I had a memorable evening. We didn’t have any issues with anything, and I can’t wait until the next time we get to experience something from our past.