A Champion. Webster defines it as “a winner of first prize or first place in competition or one who shows marked superiority”. And that’s exactly what Kyle Busch is. A Champion who showed an extreme amount of superiority. 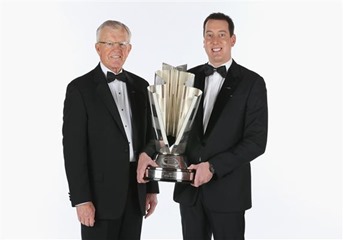 From the crash at Daytona in February, Kyle had a sense about himself that he could do the impossible. A feat that not everyone believed he could accomplish. Us fans, believed. And we believed strongly every single week.

After being out of contention for eleven weeks, he came back stronger than ever. Against all the odds and doubters alike, he won race after race and earned himself a spot in the year-end Chase. Awesome!

I’ve never been more proud to be a Kyle Busch fan. He’s grown and matured so much, thanks in part to his wife, Samantha, and it just makes him all around, a better person. He still has his point of view that many don’t agree with, but let’s face it, whether you’re a fan of his or not, he’s by far, one of the best drivers on the track every week. 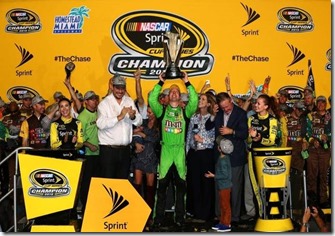 For those that don’t understand what Kyle Busch did this year, imagine your favorite football team not playing for the first eleven weeks of the season, yet still winning the Super Bowl. THAT’s what happened. 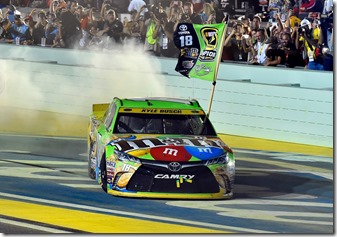 Congrats to Kyle. I hope they plaster his face on everything!