1. Can you believe the kind of roll that Matt Kenseth and the whole Joe Gibbs Racing team have been on? It’s crazy, and I’m loving it. 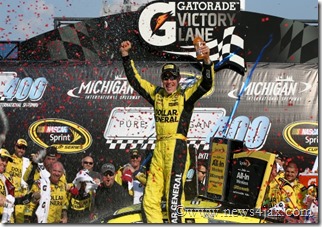 With a start from the pole, he dominated the Michigan track. I don’t know if the JGR organization is doing so well because they like the new competition package, or because it’s just ultimately their time. Either way, I’m super happy.

2. Stewart-Haas Racing is supposed to announce on Tuesday, the new sponsor for Danica Patrick next year. 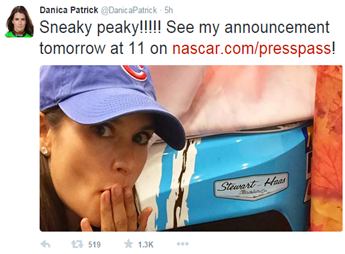 Remember we heard a few months back that Go Daddy was leaving NASCAR? Yep, that means Danica needed to find another sponsor. It’s my understanding that Nature's Bakery is going to take over. I’ve never heard of them, but looking at pictures, it appears to be something I wouldn’t eat anyway. 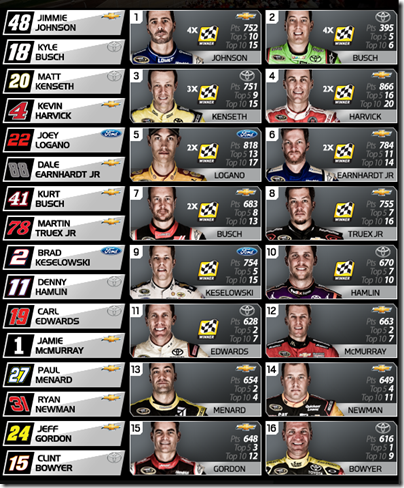 We could see McMurray, Menard, Newman, Gordon, or Bowyer lose their current spot at any moment within the next three weeks, so we’ll talk more about it then.

4. Did you catch the Xfinity race on Saturday? Seems there is a difference of opinion about the final outcome of the race. David Regan tapped the bumper of Alex Tagliani on the last turn of the race, which caused Tagliani to lose the groove line completely moving him out of the way, and allowing Regan to take the checkered flag. Some call it dirty racing. Some just call it racing.

To me, it’s just racing. That’s the same exact way Dale Earnhardt used to race, so people just need to simmer down. You don’t get to win races without taking chances. Tagliani should have raced harder and had a bigger lead.