It’s been an off-season that seemed to just drag on. January 19th had us all in an excited frenzy because tire testing began. I’m excited for another season. A fresh start. A new beginning, for some. 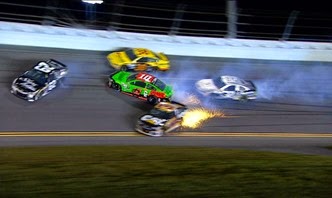 Carl Edwards
We welcome Carl Edwards to the Joe Gibbs Racing team, who I’m hoping brings some amazing talent to this group of drivers.
Kyle Busch
I’m not going to lie. I’m a little nervous about Kyle’s new crew chief being able to handle the pressures of the Cup Series. Although he’s the former crew chief for the #54 Monster Energy car that Kyle drove in the XFinity Series last year, I still fear they’ll struggle. A period of adjustment is always expected, so I hope they mesh real fast. :)
Denny vs. Danica
Have you seen the video of the Denny/Danica wreck? According to Danica, Denny wrecked her. According to Denny, he never touched her.
Danica was so angry, that she confronted Denny after the race POUNDING ON HIS CHEST!! If Denny had walked up to Danica and pounded on her chest the way she did, there would be people yelling and screaming and completely up in arms that charges aren’t being brought against him for assault. But, when a woman does it, it’s okay?? What is this double standard I’m seeing in NASCAR?
Kurt Busch
Yesterday, Kurt Busch wasn’t even CHARGED with any sort of crime, yet NASCAR has suspended him, and Chevrolet has terminated their contract with him. Pardon the language, but UN-FUCKING-BELIEVABLE. I know just as much about the story as everyone else does, and it’s my opinion that the bitch is crazy. There’s no doubt in my mind that Kurt is an asshole with an attitude that probably gets away from him from time to time, but is he a violent abusive monster? Absolutely not.

Now that racing season is back, I promise to spend a little more time on here. I’ve allowed life to get away from me, but it seems I’ve got a few readers who miss the crap that spews from my mind. ;-)