When the love of a dog takes the pain away

Pain. It can be described in so many ways. A physical suffering. An emotional suffering. Or even a laborious effort that sometimes goes unnoticed. No matter the way you feel it, it’s real, and it’s in everyone. 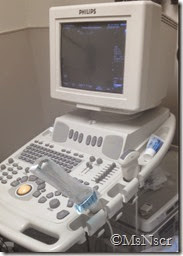 I went in to the doctor for a female procedure yesterday, and the cramping it causes, is painful. Not so painful that I walk hunched over like an old man with weights in his pockets, but a pain nonetheless. An uncomfortable one that has mentally talked me into not going to work. This pisses SS off to no end, but ultimately it’s my decision, and when it comes to my body, I’m the boss. No matter what. 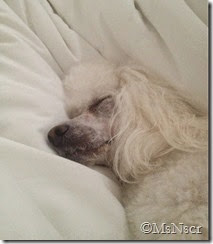 This handsome, freshly groomed Poodle, is the best bed cuddler ever. He sneaks in between SS and I, and when he lays his head on our pillows, we just can’t help but feel our hearts melt. (We only allow this when he is groomed and clean.)
While cuddling this morning, it made me think about the dog I had as a child. She was a Beagle/Lab mix, and saved me a number of times from a bad situation. You see, my Dad would throw his cigarette butts out into the lawn in the backyard when he was done smoking them. Me, not knowing any better and assuming they were okay because my Dad was putting them in his mouth, would find them and put them in MY mouth. That awesome dog, used to take them out of my mouth and lay on them so I couldn’t eat them. Smartest dog ever.

Here’s me with her in the doghouse….. 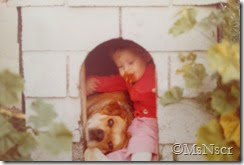 She really was the best dog ever. We were ALWAYS together. 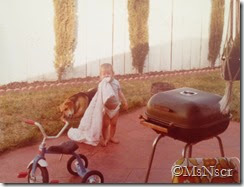 When I was five, my parents sold their house in the Valley, and moved to a huge 2-story home in a newly developed city called Valencia. You might all know it as the home of Six Flags Magic Mountain. There was very little here at the time, but now, it’s full of cars and people and is ultimately just overcrowded. Definitely not my favorite city anymore.
Not long after moving into that house, the dog somehow hung herself with a leash she was tied off to that afternoon. I can remember coming home from 1st grade and hearing the news. It was heartbreaking for a five-year-old, and the first time I can remember feeling emotional pain.

As the years past, we had other dogs. Labs, German Shepherds, a Cocker Spaniel, and even a Dachshund. And with all those dogs, I never could get close. I never developed a relationship that said we were friends. Sure, I would feed them, and maybe throw a ball once in a while, but didn’t go out of my way to bond with them. 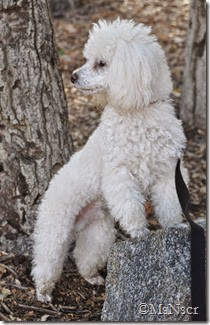 Then I met this guy, and my whole outlook on dogs changed. I never thought a Poodle could steal my heart, but every day when he looks at me with excitement and recognition, my heart flutters and I know it’s true love.

LOVE is a 4-legged word.