Getting to Know Me

What activities did you participate in growing up? 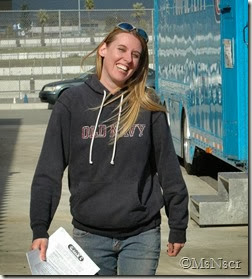 When I was in elementary school, I can remember my love for basketball starting to grow. When I started the 7th grade, I begged my mom and stepdad to allow me to play for the school team. (I went to a Catholic school with 27 kids in my graduating class. Wasn’t like I was on the Varsity team in high school.) Unfortunately, my parents pulled me off the team shortly after I had joined because they were unhappy with my grades. :-(

When I started high school, I didn’t know anyone. I was a scared little 13 year old brat, who had come from a small school, and I knew nobody. My parents figured it would be less scary for me if they allowed me to play for the Freshman team. So, I attended tryouts the summer before my Freshman year. They had the three levels (Freshman, Junior Varsity, and Varsity) all playing together that summer, but I didn’t know that until the first day of school when I saw some of my new friends, and they were going into Senior classes. I just figured I had some pretty hard competition when it came to tryouts. And since I had tried so hard, and paid such close attention to the Varsity players (not knowing they were Varsity players), I was granted a position on the Freshman team.

That same year, I was part of the high school choir. We traveled to other schools and did competitions. We’d take field trips to retirement homes and sing to old people that couldn’t hear us. Often times I would be wandering across campus to my next class, and pass another choir member singing a song we were supposed to be learning. THOSE are the times I miss about high school.

Once I started my Sophomore year, basketball and choir took a backseat to the new social life I had created. I was ditching classes, my grades slipped, and my parents pulled me out of both. Sucky times.

My grades had fallen so low, that climbing back up, was even harder than the initial work I had to put into it. And since I didn’t want to work harder, I just skated through and kept my grades just above failing. I remember my dad being furious I was bringing home a D- in Science. His favorite subject, and I was just about to fail it.

Junior year was exactly the same. My social life was waaaaay more important than studying and passing classes, so again, there was no basketball or choir that year for me. Boys were the center of my universe, so it’s boys that became my extra curricular activity.

The summer before my Senior year, I was frustrated. I missed playing basketball, but wasn’t in a position where I could just jump onto the Varsity team. So, I went back and joined the choir again.

That saved my life.

I forced myself to keep my grades up, and I forced myself away from the social life disaster I had created. I sang again, and danced again, and made new friends that didn’t ditch classes. My parents were shocked I graduated, but with enough summer school classes, I did it. Barely.

Email ThisBlogThis!Share to TwitterShare to FacebookShare to Pinterest
Labels: about me