It sent a shock to my system

“Dad is back in the hospital. Something with his heart…” 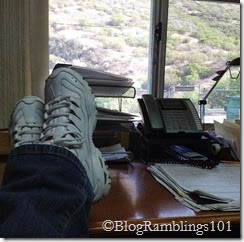 Sitting at my desk today, just relaxing because it’s so slow, and iVal makes that familiar text message sound. I slowly slide my finger across the screen to unlock it, trying to be careful not to move the phone and lose the small amount of service that I can get in the canyon, and the message pops up. For the first time since I’ve been working at The Ranch, I said a cuss word that wasn’t directed AT someone.

I was shocked that he was back in the hospital. It seemed like he was doing so well. At least according to what Sis had been telling me. I told her to keep me informed, and I walked out to the truck to take a deep breath. Know what else I did? I pushed all my feelings about religion and God out of my mind for a moment, and laid my head on the steering wheel. I then said an honest, from the heart, prayer. For the first time in years.

Four hours later, I get my first update. Now, to be honest, I’d kind of gone about my day and forgotten about what was going on in the background. I knew that Sis and Squid were headed up to the hospital to see what was happening, but I wasn’t really thinking about it. Until that moment.

Kidneys shut down. He passed out and woke up to them resuscitating him with paddles.

For the first time in 34 years, I cried for my dad because I was scared for him. I sat down in my chair, and the tears were coming whether I wanted them to or not. My mind was telling me one thing, but my heart was aching with such force, the tears wouldn’t stop.

I called Squid immediately and before he could even say hello, I was blurting out, “I hate him sooo much, but I can’t stop crying. What is wrong? Why??”

I’ve been sitting here all night, thinking about nothing else. It’s come down to this….

No matter how I feel about my dad, he’ll never be able to make up for all those horrible years. There’s nothing, absolutely nothing, that he could say, that would make it better. However, I can’t beat myself up for being sad. He is my dad, after all. And even though most of the time I spent with him over my lifetime, sucked, it didn’t all.