Marti went in for a little surgery.

Going uphill on a two lane freeway at about 80mph, weaving in and out of traffic like it was all standing still. There’s finally an additional lane up ahead and I jump the gas early to take advantage of the easy left side pass.

I complete the pass with ease, and continue up the hill to pass another car or two before I get back over (allowing the guy behind me to go even faster than I - such a nice driver I am). Just as I’m about to pass the final car, mine died. Right in the fast lane. I went from 80ish, to 30ish VERY fast. Because I’m constantly aware of my surrounding, and where every car is, I knew exactly when I could quickly pull across two lanes of traffic to get to the right shoulder without causing any other car on the road to even reduce speed. All while trying to avoid the back end slam of the guy behind me.

I had a really strong suspicion I knew what was wrong. JK and I had discussed it the last time work was done on my car. Timing chain needed desperately to be replaced, but we were going to go ahead and wait for it to break, then put an entire new engine in.

Finally off to the side of the road, my first phone call was to JK (who was out of state on a job). Sad face for me. He giggled about how upset I seemed, and don’t really think he put much thought into the situation until I began to cry. Sitting on the side of a freeway with remnants of rush hour cars (going 60-90mph). In the dark. In the rain. Just how I wanted my Monday evening to end.

I called AAA. Thank goodness for them. I had a pleasant Roadside Assistance Truck pull over and offer to help, and a very sexy Highway Patrol Office stop to make sure I was okay. I kept myself entertained by playing on my phone and chatting with JK. With him out of town, I was on my own to make things happen. He made arrangements with my mechanic (one of his best friends) to store and start work on the new engine replacement right away. I called Sis and asked if she’d pick me up and take me to the ranch so I could get a van to drive temporarily.

One and a half hours later, they finally showed up to tow my car.

Y’all…this is the awesome van I drove for FOUR days. (Does that sound sarcastic enough?) It’s a work van that doesn’t get used for anything other than misc jobs around The Ranch. It was lovingly dubbed “The Surfer Van”, by all the trainers. However, those of us that have had to drive it and endure the stares of those around us, we call it “The Rapist Van”. I suppose it wouldn’t have been so bad if the driver door handle was operable. Getting in and out on the passenger side, made it even more easy for others to laugh at me. 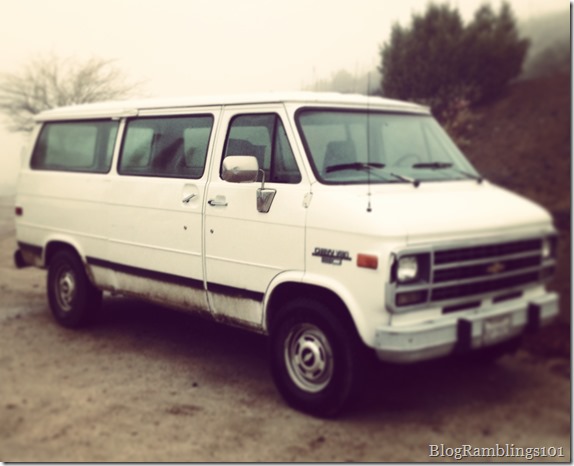 I watched the new engine go in. Let me tell you something, if you aren’t in to cars, or have any knowledge about how some things make your car run, the only thing I can compare it to is the human heart. When one performs a heart surgery, there are very precise steps that must be taken. Certain things need to be hooked back up a certain way. Well, same goes for a new engine. It took about 2.5hrs for the guys to do it. I sat back and watched the magic happen. I shed a tear when she finally started up. It was like she’d been brought back to life. I was happy. 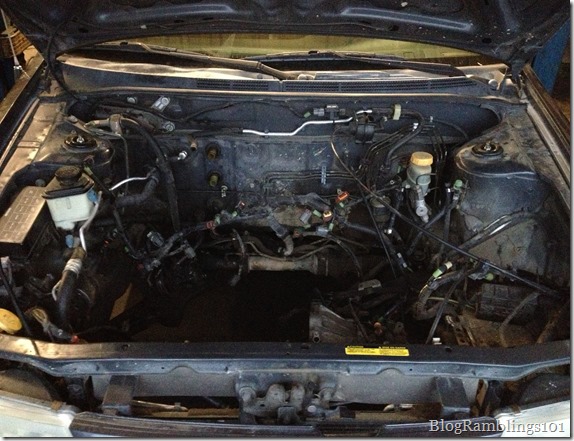 Unfortunately, a broken wheel mount forced me to leave her at the shop one more day. Bummer. But, I was overly excited when I drove her away the next day. She was back under my control. And all I wanted to do was drive her.

Sis needed to do a few errands that day, and since I needed to break in the new engine, I picked her up and we ran them together.

It’s been about 500 miles and she’s going strong. Pretty cool to go from 209,000+ to a whole lot less. Almost makes me feel like I’m driving a new car. Except for all the rattles, of course. What WOULD I do without the sound of rattling?

I’m glad to have Marti back….