Here’s the cute birthday invitations I made up… 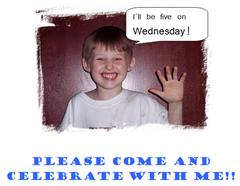 We were going to have a big party at Chuck E. Cheese’s. Friends and family were all invited to celebrate him turning the big F.I.V.E.!

A few days ago, I talked about my laptop being sick. I ended up having to replace the hard drive. (Yay for bigger and faster.) While going through some very old files on an old disc I found, I accidentally stumbled upon something I’m sure I was never meant to see. It’s a story, written by my oldest stepdaughter, of the tragic events that led to the removal of me from our home, just days before my son’s birthday. It was the story of a scared mom, who robbed the innocence of a five year old boy, and two teenage girls.

I saved the Word document on my desktop. It’s been two days, and I’ve opened it and read it about 30 times, and every time I do, I’m caught wiping the tears before I can get to page two. Reading the heart wrenching details, as seen through the eyes of a then 14 year old teenage girl, makes reading it even harder. I try to read it as if I’m a third party, but when the words become actions, a cold chill runs through my body and I feel as if I’m standing in a corner of the room watching everything unfold. And let me tell you, that seeing the pain and extreme fear in the eyes of the children you’re supposed to be protecting, is the worst feeling that could be placed upon me. All the days/nights/weeks/months spent in a jail cell, crying to get out, don’t even come close to the sadness I feel when I see the uneasiness in my son’s eyes today, six years later.

There are a lot of things about that day that I’ve been able to come to terms with. I was given the chance to apologize to The X last year, and although I’m not certain he took it as such, I have been able to let that part go. I feel I did what I could to show I was sorry. Being able to sit down and apologize to his two daughters is not something that will probably ever happen. They don’t want anything to do with me, and I honestly can’t say I blame them. I’m totally okay with it. I just wish they knew how different I am today. I just wish they knew how sorry I was for what I did and what I caused them to go through.

And on that note, I will say…Change can be an amazing thing. It allows people to start over and become the person they WANT to be, not the person they were raised to be.