This week in NASCAR…

Camping World Truck Series: Kyle Busch took off and left Ron Hornaday in the dust after a restart with four laps to go resulting in a win by .577 seconds. This win locked up the Owners Championship for him in his first year as an owner. Todd Bodine clenched his 2nd title last week, but was officially able to celebrate this week. Congrats to him. 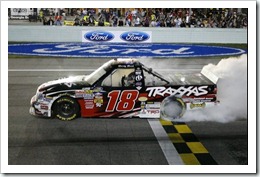 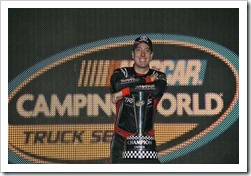 Nationwide Series: 25 to go…caution comes out because Chase Mattioli hit the wall. Restart with Harvick in 1st, Busch in 2nd. Kyle took the lead and didn’t give it up. He wins the race and brings another Points Championship trophy to the Joe Gibbs camp. Brad Keselowski took the title last week, but like Todd Bodine, wasn’t awarded and able to officially celebrate until today. I say, through gritted teeth, Congrats to him as well. 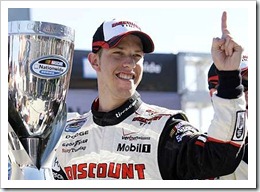 Sprint Cup Series: Starting Sunday’s cup race, Denny Hamlin had the points lead. 23 laps in, and he spins. Having to fight his way back through traffic, he ended up a disappointing 14th. Sorry Denny. I was actually pulling for you. Kevin Harvick wrecked Kyle Busch, and after turning into a fire ball, Kyle was out.

Carl Edwards won the race, but Jimmie Johnson (puke!) stole the show. Five cup titles puts Jimmie in a class of his own. 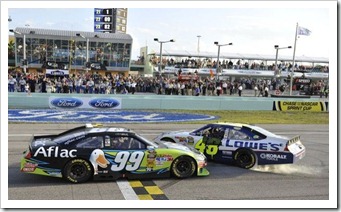 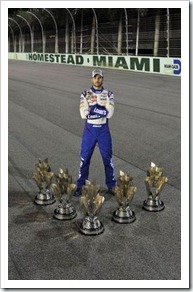