It’ll Be Here Next Week…

…is all I kept hearing. 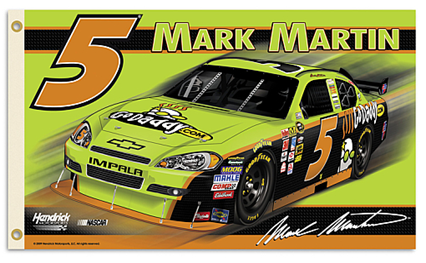 I owned this flag for 2 ½ months. I never had it in my physical possession, but I owned it. Paid for it. Walked away with a receipt and the assurance that it would be mailed to me as soon as they arrived. (NASCAR season hadn’t quite started yet, so when she told me they hadn’t come in yet, we weren’t too terribly shocked.

At the same time I ordered this, I bought 3 other flag, all of which arrived, one-at-a-time. *sigh

An entire month goes by, so I decide to respond to one of the spam email newsletters this place puts out. I made mention of a few things she was sure to remember so I was certain she knew who I was as she read my email. I politely mentioned that I hadn’t received the MM flag (pictured above), although I had received the others, thankyouverymuch.   No response.

About another three or four weeks later, I sent another email, again, in response to her mass mailing newsletter. This time I figured I wasn’t going to try to make friends anymore, so my email was short and to the point.   No response.

Two more weeks go by, and I finally said to JK, “At this point, I just want my money back so I can go somewhere else to get it. The season is ½ over.” He said, “Okay. I’ll call her and see what she says.”

**side note: thank you JK for calling. knowing how upset i was about it, i would have said something to the woman i shouldn’t have. don’t want to do something i’m going to regret, so thank you. thank you.

Moving on…  JK finally calls and she tells him the driver won’t authorize the release of the design on the flag (*cough – bullshit – cough*), but he accepts it and hangs up.

Today, I’d had enough. I told him I had now become beyond upset and just wanted my full refund. No further questions from me, your honor, and no more lame ass excuses or lies from her please. He called, got her to refund it and hung up. Thank you, again JK. (insert X’s and O’s here for you).

So it doesn’t seem I’ll be getting my 2010 NASCAR flag this year, but that’s okay. Some other things are just more important. :-)