Can YOU drink regular milk? 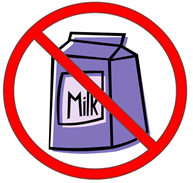 When I was growing up, we weren’t allowed to have soda. Water (barf!), milk, iced tea, or orange juice was all that was in our fridge daily. My parents were more interested in us eating/drinking healthy, than they were us getting junk we wanted. Same goes for cereal. We weren’t allowed to have Fruit Loops or Apple Jacks because there was too much sugar. If we wanted cereal, we had to have kinds like Raisin Bran or Special K. As an adult, I still eat the non-sugary cereals. It’s just what I’m used to.

About ten years ago, when I was working at The Ranch, my boss mentioned to me that some of the stomach trouble I was having every day, likely had to do with the milk or cheese that I was eating. She suggested I take a probiotic daily to help with it, but those pills aren’t cheap, and I just didn’t believe it was helping, so I stopped. The stomach issues continued, daily, and I just dealt with it.

As the years have gone on, and my body does a complete change in its older age, the stomach problems continued, and even got worse. A couple of years ago, SS mentioned to me that I could be having a lactose problem, and all the problems I’m having could go away if I switched to lactose free milk. The science geek in me decided to make an experiment out of it to see if this really was the problem, so I went and got a half gallon of Lactaid. Could my old boss have been right all those years ago? 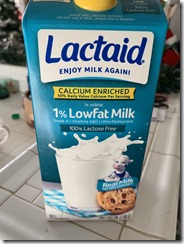 -Drank one full 8oz glass of regular 1% milk. One hour later, I was experiencing extreme stomach cramping that was caused by extreme gas. This lasted 2.5 hours.

-Drank one full 8oz glass of Lactaid, lactose free 1% milk. Did not experience any stomach cramping or gas.

I was skeptical at first, because I was concerned that the taste of milk that I had grown to love, would be different. But it wasn’t. I was able to have a bowl of cereal, a glass of chocolate milk, and the creamy noodles for dinner, without any problems. (Not all at once, of course.)

Today, I am a little more careful about what I eat. I know that I can’t have lactose free things when I go to a restaurant, so it’s likely that I won’t be completely free from problems, but now that I am aware of the issue, I will be much more observant about what I order when I’m out.

At this point, it seems that I’m only affected by milk or cheese. I haven’t experienced any issues from butter, but I do plan on making that an expeiment if things start to change.

Email ThisBlogThis!Share to TwitterShare to FacebookShare to Pinterest
Labels: health