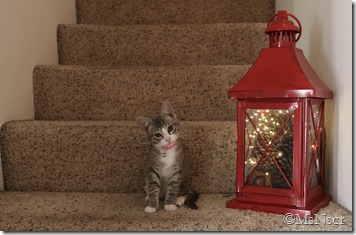 Our little GraycieRoo is eleven weeks old today. She’s sporting a new collar and bell, and is getting into more and more trouble.

She’s finally gotten to a point where she isn’t trying to catch, chase, or eat the bell that’s hanging from her collar. However, she thinks the garland hanging on our TV stand, is a play toy. Every time we leave the house, she tears it down and rolls around on the floor with it. She carries it around in her mouth, like a comet shooting across the floor with its long tail.

I don’t fully understand the relationship between her and Ebony. The reason we started looking for another kitty, was because we felt Ebony needed a buddy. Unfortunately, ever since Graycie arrived, he’s looked nothing but annoyed. She follows him around, everywhere, and it’s obvious he gets tired of it. She grabs onto his legs as he’s walking by her, and sometimes when he’s just sitting still, she will come up in front of him and throw her arms around his neck like she’s hugging him. It’s absolutely adorable, but I know he is annoyed. He has several little scabs on the back on his neck. When I try to look at them, he pulls away.

Is Graycie hurting Ebony? I see them sleeping together, sometimes, and Ebony spends a LOT of time licking Graycie. When I see this stuff, I have to assume they’re getting along and that Ebony doesn’t hate Graycie, right? Maybe he is just putting up with her to make Mom & Dad happy?