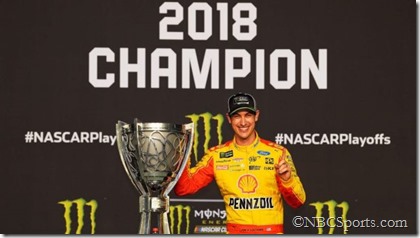 It’s been a few weeks since the Championship was awarded to Joey Logano, and I still don’t even know what to write.

Joey Logano is not what I would call ‘the best’. He’s not even in the top 10 of best drivers. Many compare him to Brad Keselowski, I think because they’re on the same team, but Joey doesn’t even compare to Brad. I mean, Joey isn’t even the same caliber driver as many of the others.

I do not believe Joey deserved to win that Championship. I think it’s ridiculous that it has to come down to whomever wins the race. He shouldn’t have even been in the final four. If the Championship was awarded based on who won the most points in the season, then Kyle Busch won. The stupid rules of the final race, need to change.

It’s been a few weeks since the Championship was awarded to Joey Logano, and I still get irritated when I talk about it. Grrr!