From the time I was old enough to know what New Year resolutions were, probably age 13 or 14, I would make them and then ultimately break them. I would try again every year, because I thought it was against the rules to start over again during the year. I just assumed the rule was that you had to wait until the next January 1st. As I became older, I understood the concept a little better, yet still broke each and every resolution I set out to make. Every year.

I finally decided that I would stop making resolutions, because it seemed silly if I was just going to keep breaking them. I was unrealistic about the goals I was setting. Trying to jump instead of taking baby steps, was ridiculous. I know myself better than that. 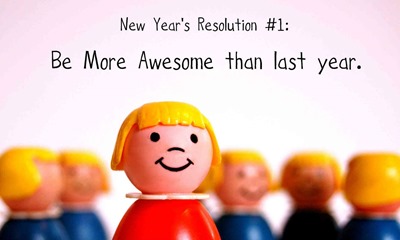 So this year, let’s take baby steps. Perhaps once I’ve taken enough small steps, I can start to take bigger ones, then maybe I can skip, and ultimately end up running through resolutions. Perhaps.

+ Exercise - I wake up every morning to a man that works his ass off every day to provide for our family. He deserves to have a woman on his arm that takes care of herself. I’ve stepped up the exercising to a level in which I’m comfortable, and don’t feel overwhelmed with trying to keep up. I don’t have a set structure of exercises, but I’m determined to keep at it.

+ Declutter and/or Organize - We do not have storage in our place, so finding the space to put all our stuff, is tough. We have a closet underneith our stairs that is packed with boxes of stuff we don’t have room to put up or display. There is also tubs that contain holiday decor. I’m in desperate need of a desk, but don’t have anywhere to put it. So, I vow to spend some time sorting through and organizing all our closets.

I guess we’ll see how I do this year. I think the most important thing to remember is to keep trying and not give up.

Do you have trouble keeping resolutions every year?
What are your New Year resolutions for this year?