He Knew I Was There

Faith. I struggle with it. Believing there is a higher power, is something I’ll always question. Eight very long years of catholic school, and two additional years of religion classes to make my Confirmation, left me with a bad attitude towards the church. And twenty-three years later, I just can’t say that I believe any more than I did when I was attending.

Today, I had a brief moment to stop and talk to two people I haven’t actually spoken to in more than sixteen years. As I told them both all the good and bad things happening in my life, a little Earthworm came out from the grass and started circling my grandfathers name. 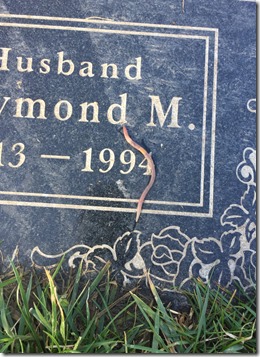 When my grandfather was alive, he was obsessed with gardening and making his flowers the most beautiful in the neighborhood. He would pick fresh ones every week and give them to my grandmother to put in her kitchen window above the sink where she did dishes. When there were too many flowers, he would give them to people walking down the street. Women walking with kids, men walking dogs, the mailman. Anyone that would walk by, he would offer flowers to. He would light up like a flashlight when people would comment on how big and beautiful they were. He was just so proud.

But with gardening comes worms. Lots and lots of worms. I remember him showing me them and trying to teach me that they weren’t “gross bugs” as I so lovingly named them. They were just there doing their job. A very important job.

Was it a coinsidence? I don’t know. I’d like to believe that he knew I was there and was saying hi to me, but the skeptic in me, thinks it just might have been the heavy rains that brought out Mr Worm. I saw no other worms as I walked along the grounds, but who really knows?

**As a side note, every single headstone around this one, was covered in mud and sitting water from all the rains we’ve had recently. Why was this one spared?