Now that we’re a few weeks into the new season of most television shows, let’s talk about which are our favorites.

Gotham- This show is beginning to get a little more gruesome than I’d like. The extreme way in which they feel they need to actually show someone dying or being killed, is just getting to be a bit much. However, the stories are so great, I can’t help but tune in week after week.
I assumed it would follow the exact storyline as in the original Batman movie that we know (okay, by this I actually mean the Michael Keaton story of Batman. Because, well, that is the best), but I feel like it’s a bit different. SS thinks there’s no way it will be exactly the same, so should we not assume that Barbara becomes Barbara Gordon?

The Big Bang Theory- El oh el at this show. Each episode, even after 10 years, still has me laughing out loud. It’s great. I’ve heard people say it several times, that when a show is in trouble, they always bring in a new kid to spice things up. I remember The Cosby Show doing that. I also remember All In The Family doing it. I’m sure there are others, but you get the point.

NCIS- This show has me scratching my head. It’s not the storylines, they’re fine, which is surprising after 14 seasons. It’s Bishop. It’s Quinn. It’s Torres. I just can’t get behind them. I don’t like the chemistry between them. Wait, there’s not any. That’s the problem. I don’t know why, but it’s all wrong. Quinn has an attitude that I can’t stand, Torres is too busy thinking about his past and where he was, and Bishop is just not a great actress. She’s not believable. I’ve tried for a couple of seasons now, to get used to her, but I just can’t.
It’s Ducky’s last season, so that leaves Gibbs, McGee, and Abby to make up the backbone of this show we’ve all grown to love. I’m not sure they are strong enough to outweigh the bad acting of the other three before people stop watching.
Perhaps it’s time to just end it? Ugh. I hate the thought of that. Or maybe Gibbs, McGee, and Abby can move to New Orleans and work with the cast of NCIS: New Orleans. I hear they’re looking for a new person. ;-)

Scorpion- Great cast, great chemistry, great story lines, great show. No matter what case these guys are put on by Homeland Security, they’re hilarious, informative, and a little strange. And they make it work. Plus, I think having Katharine McPhee on the show, adds a little spice. I remember her from American Idol, and never imagined she would make the jump to acting. In all honesty, I like her better as an actor than a singer. 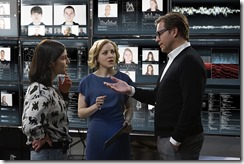 Bull- This is Michael Weatherly’s new show. Most people know him as Tony DiNozzo from NCIS. A little bit of the DiNozzo character comes out once in a while, but for the most part, he’s a completely different person. The show is very impressive, and the cast is fantastic. They’re believable, and THAT is what makes good television.
I’m very curious to see how many different stories and ways they can make their strategy continue to work, so I’ll keep tuning in each week to find out.

No Tomorrow- Brand new show about a guy who is convinced that the world is going to end in a little over eight months. He’s hell bent on crossing everything off his Apocolist, and he’s caught the eye and heart of a woman who is definitely not a risk taker. His jumping in fountains and doing embarassing things, leave her questioning his sanity, but when she realizes how freeing and fun these things can be, she makes her own Apocolist and they help each other.
Falling in love, though, doesn’t come without a price when someone wants to try everything before dying.

Notorious- Piper Perabo’s new show. Love her!
The media and criminal law have a complicated relationship. The story of a salacious crime is a powerful tool to drive up news viewership numbers, while what's being reported and how it's portrayed can sway public perception of crimes and the parties involved. These facts are far from lost on news producer Julia George and criminal defense attorney Jake Gregorian, who have a relationship built on the ways they can benefit each other professionally. "Notorious" is inspired by true stories about Mark Geragos and Wendy Walker, who also serve as executive producers.

That’s enough from me for today. I could go on and on with other shows I love like, Blacklist, Blindspot, Hawaii Five-0, American Housewife, or How to Get Away with Murder, but I’ll save those for another time.

Did I mention any of your favorite shows? If not, tell me about them.