Kids. They can be so rambunctious and careless at times. And in times like that, bad things can sometimes happen.  Back in October, there were some kids playing out by our front door. One of them jumped down off of a balcony, and landed right on top of Francis. 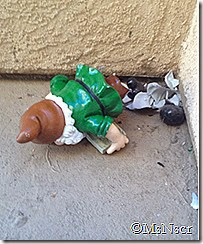 Francis came to live with us back in March of this year, right after StepDad died. :(
He sat ever so beautifully at the top of the stairs that welcomed you to my home. (click the link to read the story).

I happened to be watching out the window when it happened. Francis fell from the weight of the kid when he landed on him, and I felt an immediate pain shoot through my body. It was weird. Took the breath right out of me as I fell to the ground crying. SS tried to be a hero and went after the kids, but by the time he went looking – after trying to console me – they were nowhere to be found. Fear not, I’ll never forget the face of that kid. When I see him, I’ll know.

Two and a half weeks later, Sis and Squid showed up at my house with a gift. They called it an early birthday gift.

Meet Grimble…
He’s the new Gnome that resides at Casa de Gnome. He temporarily took Francis’ place at the top of the stairs. 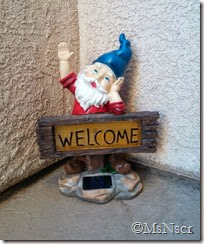 Thank you Sis and Squid. He fits right in around here.

It took me a real long time to decide what I wanted to do with Francis after his fall. Call it not being motivated, or just plain lazy, but whatever it was, it’s done. He’s been placed back at the top of the stairs, and Grimble has been moved to the stairwell in our hallway. 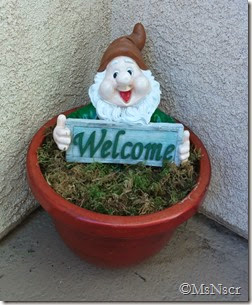 Email ThisBlogThis!Share to TwitterShare to FacebookShare to Pinterest
Labels: gnomes