SS isn’t what I would say an hard core exerciser, but he totally understands the need for exercise and staying fit. I do too, yet don’t care. I’ve spent 35 of my 36 years being thinner than necessary. Part of it was done on purpose. Part, not.

Ever since we moved into this place, I’ve began using 10lb arm weights, purely as a test. A test of endurance. A test to see just how much I could actually lift and for how long. Shockingly enough, 10lbs was more than I could handle. After a single rep of ten, I was feeling a burn I hadn’t felt in a long time.

Every night, for the next few weeks, I did lift after lift. I’ve increased the reps over time, and continue to feel that same burn.

We are just about to hit the halfway mark of 2014, so I’ve decided to go full force into a routine. Let’s make June, all about Abs!  Check out this calendar…. 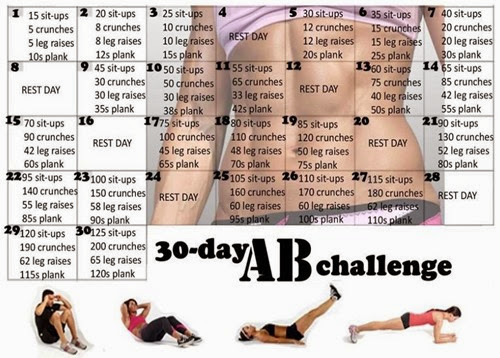 Yeah, maybe for you. But for me, perhaps not. I did 10 crunches tonight as a test, and I thought my ribs were going to pop out of my chest, and my spine was going to pierce my back. Ouuuuuuuccchhhhhh!!!!!!!! Not real sure how I’ll ever get to 200 of them by the 30th. Do you believe in miracles?

Are you doing an exercise routine? Share your routine and maybe I’ll make THAT the challenge for July.

Email ThisBlogThis!Share to TwitterShare to FacebookShare to Pinterest
Labels: exercise