SS and I took our first road trip. I’m going to admit it now. I had some reservations about it, based purely on WHY we were going there.

The plan was to pick his daughter up from her moms work, go check into our hotel, and then head over to her grandparents house for Christmas Eve dinner, returning the next night for Christmas Dinner. It’s a bit of a strange situation, since I was sitting among the family of SS’s ex, but to my surprise, they were a group of awesome and welcoming people. I mean, I’m just a few weeks into a relationship with their daughters ex. They didn’t HAVE to be nice. They just were.

Initially, I thought I would spend most of the first night sitting in a corner avoiding any sort of question and answer session, but that’s not quite how the evening went. Margaritas made by the man of the house, brought me out of my shell, and by night #2, I was fairly comfortable. Just takes me a little bit sometimes.

We’re back home now, after a six hour drive home. We saw NO snow. There was just a light dusting on the mountain tops in the distance, but nothing we could actually reach out and touch.

His daughter is a real fun nine year old. Totally different than a boy. I can only hope she likes me as much as I like her. 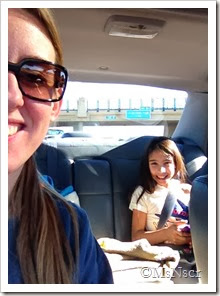 Here’s to the beginning of something wonderful….