It’s Friiiiiiiiday! Woot Woot. I’m beyond excited because I’m on vacation for the next nine days. Yaaaaaaay!!

About a week ago, I got a call from Squid asking if I wanted to go see a taping of The Tonight Show before Leno was gone. I made all the necessary arrangements, invited another friend, and off we went.

As we walked in, they handed out numbers. Wouldn’t it figure I would be given this one… 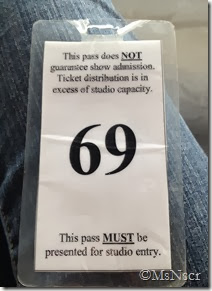 Once inside, you weren’t allowed to have your phones out. However, with the help of a sneaky friend I brought along, we got this before it all started…. 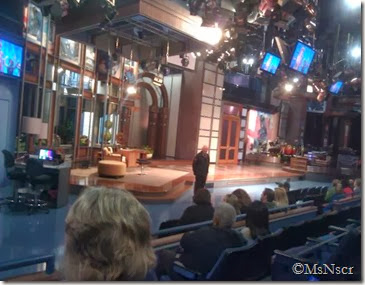 The guests were Blake Shelton (country singer) and Kathy Lee and Hoda (from the TODAY morning show), and the musical guest (that we sat RIGHT IN FRONT OF), was Imelda May. I had never heard of her before this, but she’s amazing. Great set of pipes.

If you watch The Tonight Show regularly, you’d know about Jay’s Smart Cat. I don’t think I need to tell you who’s cat that is, do I?  ;-)

It was totally worth it to take the afternoon off work to see this. Leno was hilarious. I’ve heard many people over the years talk about how nice of a guy he actually is in person, and he did NOT disappoint.

Plus, he’s a car guy. How bad can he really be?