Back out of the box

Remember that box I was so afraid to step out of, then did, only to jump back into it? Remember?

Over the weekend, I opened up one of the flaps on the top, and allowed someone to peek in. I’m apprehensive about letting people into my world, so only a peek he got. Shockingly, he wasn’t scared off and asked to see me again.

He doesn’t like to have his picture taken, so that’s something I’ll have to work on. Can’t tell a story about someone without a photo, right? 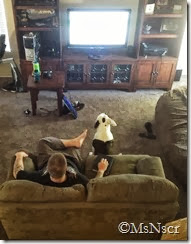 He kicked my ass at some trivia show we were watching. I can’t wait to see what happens during Jeopardy! He’s been around the world in the military, so his knowledge of things is much more in depth than mine. It doesn’t intimidate me like it has in the past. Perhaps I’m just over some of the insecurities that once were so prominent. Or realized that a relationship between two people, no matter the type, shouldn’t be based on who’s smarter.

*Damn smart aerospace people. Dad would be so proud.

Email ThisBlogThis!Share to TwitterShare to FacebookShare to Pinterest
Labels: dating