On the way to meet my step-dad yesterday, we ran into some friends of Mom’s. I kid you not, readers, this woman had a CAT, on a leash, in her car. She said the cat goes everywhere with them like a dog. She is usually found draped over the headrest of the driver seat. *sigh* 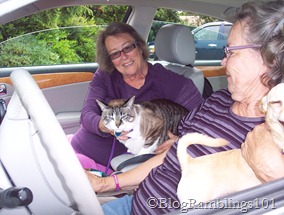 I’ve seen our trainers do things like this with cats, so I don’t know why I’m so surprised. I guess I just didn’t expect to see it with regular people.

I spent the day with my step-dad. Ever since my Mom left him last summer, he’s become somewhat of a hermit. He never was real social, which was one of Mom’s complaints, so he was overjoyed to have another person to chat with. I met him around 1:00p. We went to the local Rite Aid because he didn’t have any beer at the house. As the 6-pack called my name from the cooler, I said no wonder people love vacation so much. they can eat and drink as much as they want, and it’s acceptable. The guy walking down the isle smirked. I think he would have given me a high five if he hadn’t been with who I can only imagine was his girlfriend.

I’ll be honest, though. After SIX hours of drinking, I was ready to quit. We laughed, told funny stories, shared fears, and genuinely had a great time. He had gone and gotten stuff to make one of my favorite foods. The tacos he used to make when I was growing up, will forever be different than any other. I do not have a photo, however, trust me when I say they look just like any other taco. it’s the mental state of mind I enter from childhood that makes them so awesome!

Obviously neither of us were in any position to drive, so Mom picked me up around 10:00p. With tears in our eyes, we said goodbye. He left this morning for a month long trip to Wisconsin to see his daughter and grandkids. The sadness he felt last night when I left will soon be filled with the laughter and arguing of a brother and sister duo. And he can’t wait.

Mom and I are headed out today to just drive. Wherever we end up, we end up.