This week, we turned RIGHT!

Whoa! Lots of stuff happening this week in NASCAR, and one of them is a right turn.

The crew chiefs of Denny Hamlin, Kyle Busch, and Joey Logano have been fined $50,000 each and put on probation till the end of the season, for putting unapproved oil pans on the cars. Not illegal ones, just ones that weren’t approved before being put on. Whoopee. But, rules are rules, boys.

Red Bull is leaving NASCAR. Ya know, I’m pretty surprised about this. There is a lot of Red Bull sponsoring in racing, but apparently, it’s aim towards teenagers isn’t successful in NASCAR. I guess NASCAR fans want beer, not Red Bull. Can’t blame them. Me too. 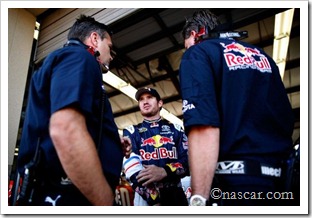 Carl Edwards is talking to Joe Gibbs Racing about a ride because Roush Fenway Racing may not have enough sponsorship to pay him what he wants. What? Did I really just say that? RFR doesn’t have enough money? Joe Gibbs Racing may not be able to pay Edwards what he wants unless it gives him sponsor Home Depot, which means today’s pole-sitter Joey Logano could be out of a job if another sponsor isn't found. Are you hearing what I’m saying? Carl Edwards is demanding so much money that these race teams can’t afford him? HE’S NOT EVEN WINNING! HE’S NOT EVEN FINISHING IN THE TOP FIVE (until today)! Oh, brother. Get real, Carl. I support you because I’m obligated to by Aflac and Fastenal, but come on. Start winning some races and become worthy of what they’re paying you NOW before you start demanding additional monies you’re not worth. Money really does make people ugly. 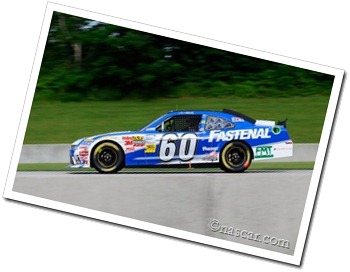 Kasey Kahne is slated to take over the #5 car that Mark Martin currently drives. Mark Martin was slated to replace Kasey Kahne in the Red Bull #4. I don’t now that it’s a fair swap, but a swap nonetheless. With Red Bull leaving and sponsorship/ride troubles, will Mark Martin drive? Or is this the year that he should walk away? He’s said it over and over, “I will drive in 2012”, but with this new development, will he change his mind? There is still seven months before the 2012 season starts, but talk should start to swirl around the garage. Oh to be a fly on those walls.

The Nationwide race on Saturday was run at Road America (RIGHT TURNS) in Wisconsin. I love love love that track. 14 turns, and every one of them is action packed when five or six cars are fighting for the same position. It came down to fuel because of so many cautions. Reed Sorenson held off Ron Fellows for the win. A crazy win! 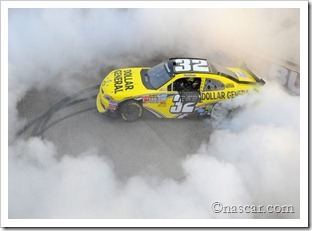 The Cup race today was at Infineon Raceway in Sonoma. I’ve heard stories from my uncle about this track, so attending this race isn’t in my top 5. Kyle clocked the fastest speed of the day and when he was run off the road by Juan Pablo, he said that’s some Dukes of Hazzard s**t right there. Ha. Love him. But let’s congratulate his brother Kurt Busch for the win! First road coarse win for him. 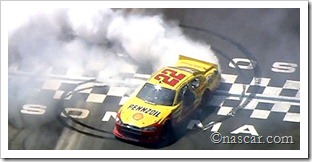 Road coarse racing in NASCAR has always been exciting for me. Something sexy about watching these guys shift. Foot movement by some of these guys is amazing. Boris Said used to be my favorite, but he hasn’t been spotlighted at these road courses in a while. Today I watched Kasey Kahne, and his foot movement reminds me a lot of the way Mark Martin does it. Back when the pedals were closer together.