People watching is fun, if you don’t live with THIS woman 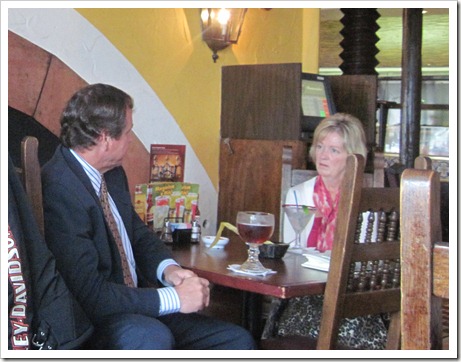 See this couple? They made the mistake of sitting near our table at lunch the other day. I am a huge people watcher, and when there’s a couple near me that’s fighting or causing a scene, I can’t help but stare. After all, if they didn’t want me watching, they shouldn’t be putting on a show.

This couple was in attendance at a wedding that had taken place just a bit before. I know this because when they were leaving, she said, “Let’s go. I don’t like any of the people that will be there, but let’s make an appearance.”

When this couple first sat down, she was in what appeared to be a real bad mood. Her arms were folded and she was just being crabby. She kept saying, “It’s too cold in here” or “It’s cold. I’m freezing”. Let me just say this first off. It was in the low 60’s yesterday, but inside the restaurant, it was not near as cold. I wasn’t even cold, if you can imagine that. Here’s how their first conversation went…

Him: I don’t know what to tell you.

Her: Give me the car keys.

Him: Okay. (He hands her the keys)

I don’t exactly know what was said by her here, but it clearly was more bitching because just then, she THREW THE KEYS AT HIM.

Him: He got up and left the table. (I figured he was going to the car, but secretly hoped he’d drive off while gone so she was miserable even more.)

The man comes back, with a leopard print blanket for her. She wraps it around her legs (seen in the picture above), and continues to complain about how cold it is.

The rest of the time they sat there, she continued to complain about one thing after another. When her drink was brought to the table, she took it back up to the bar and complained that it was too strong. The man eventually put his hand down on the table after listening to her complain for 20 minutes and said, “I don’t know what you want me to do.” She bitched some more, and then after they were finished with their drinks, she stood up and started to walk out. She stopped, turned around to him and stared as if she wanted to say how dare you leave me standing here on my own. Come on! But, she didn’t say it. She just glared at him with those evil eyes. She finally walked off, and he finished his drink alone.

After watching this entire event take place, I wanted to go over to the man and tell him how sorry I was that he had to deal with this person day in and day out. He took his last swig, stood up and straightened his jacket, took a deep breath, and left. I could feel the pain he was experiencing by looking at his face. This man was truly miserable.

I don’t know if they were married or not, as neither of them had wedding rings on, but this was clearly a couple that were not happy in their relationship and would definitely benefit from being apart.