Getting to know an absent parent 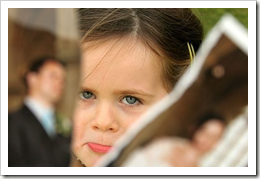 I remember on the drive home from school one day, asking my mom did the judge decide we should live with you or dad? Secretly I was hoping she’d say dad, because I was NOT fond of mom’s new boyfriend, but she didn’t. We were on one of our last drives to the ‘family’ home, and for the first time I can remember, I experienced true sadness. I wanted to cry. Why was someone other than my parents allowed to tell us who we could spend our time with? Why couldn’t we just spend equal amounts of time with each parent? Why, at the age of 7, was I having to think about this stuff, when all I wanted to be doing was comparing sticker books with Doreen and Nicole.
As the weeks, months, and years went on, we saw less and less of dad. He was a ‘weekend father’ and had become sort of a background parent to mom and the boyfriend who had now become “the husband”, AKA: The Stepdad. He very rarely attended events we had (band competitions, basketball games, choir performances, etc), but was it because we had grown so far apart from him that we didn’t invite him or even want him there? Or because we knew he wouldn’t attend? Or was it something completely different? Am I holding a grudge about this for the wrong reason?

As I start to think about what it’ll be like if I get to have weekend visitations with Ryan, I have to admit, I’m scared of one thing, and ONE thing only. He’s 10. Is he already at that point that I had reached with my dad? Has he become so close to his father and so far from me, that he’s already developed a sense to push me away? It doesn’t seem that way by the way he acts around me now, but how can one tell when nobody will let me be around him for longer than two hours? Grrr @ the whole situation.

I have so many other questions that bring on other questions and – knowing my history of anxiety – will bring on fears. I can’t let that happen. That’s not who I want to be. Where is my best friend when I need her?